You are here: Home > Writing > OUR ANIMAL TALE: Three is not a crowd

Bob and I lost our 18-year-old cat, Molly, in 2014, leaving an enormous chasm. Eventually we discussed adopting another cat, and endlessly explored Petfinder.com for a potential new adoptee. While each cat tugged at us, none seemed to be “The One.”

Finally, we landed on an adorable kitten available from the Friends of the Plymouth Pound (FPP) in Kingston. Zoe was a beautiful domestic short-hair, who had been trapped as a weeks-old feral along with her two siblings, Piper (a female) and Baxter (a male). From her photo and description, we were smitten.

When we later visited the shelter, noses pressed to glass, we watched Zoe resting. A volunteer said, “She is just so sweet. When you hold her she will snuggle right up into your neck.” We were immediately besotted.

Anxious to meet her, we completed the adoption application and, upon approval, arranged to meet Zoe, which turned out to be “a total love-fest,” according to the FPP volunteers. We adopted Zoe and brought her home the next day.

This tiny furball was a shy little thing whose vulnerability tugged at our heartstrings. Very timid, she spent weeks hiding under the bed in her “safe room.” To gain trust and build confidence, we worked tirelessly by laying on the floor and “purring,” “grooming” her with our noses when we could, and – well – acting like cats, batting toys, chasing string and rolling around (if you’re laughing at the thought, just imagine how we felt doing it). Soon Zoe rewarded us with her trust and enormously lovable and energetic personality.

But Zoe is a social butterfly, and she wanted a friend.

We had previously observed Zoe’s sister, Piper, on her second day at the FPP shelter. An adorable girl with calico smatterings reminiscent of a Jackson Pollack painting, Piper shyly huddled in her space while Bob gently stroked her rabbit-soft fur.

Zoe wanted a pal, so what’s a family to do? Adopt Piper, of course. And so we did.

Zoe was elated with Piper, instantly gravitating to her, unable to get enough. Zoe “fostered” like a maternal sister – grooming, snuggling, cuddling and engaging her with playful trilling. Timid around humans during the day, at night Piper would join Zoe in rambunctious and joyous romps throughout the house. To reassure Piper, we employed methods used with Zoe, and Piper slowly emerged as a sweet, quiet kitty.

Meanwhile, Baxter, the third sibling of this feral bunch, was also in the FPP adoption network. Trapped a week after his female siblings, this fluffy guy was distrustful and fearful. To promote socialization, Gayle, the FPP director, had taken Baxter home as a foster kitten, where he’d made progress – responding to her caress with a deep, whole-body purr and loving her other cats. When Gayle had to travel in January, she asked us to foster him temporarily during her trip, and we agreed.

Baxter’s first night in our home was stressful for him. Already highly wary, he was naturally frightened in this strange environment, and with the difficulties of his socialization, we thought we had a “tough guy” on our hands. What happened, however, was remarkable.

Late that night, Baxter ventured out of the “safe room” into the hallway, where he encountered Zoe.

The much-smaller Zoe responded with a resonant hiss as if to say, “Now, now – I’m the boss here; we’ll have none of that,” whereby Baxter flopped onto his back, and attempted to engage Zoe in play. Zoe had gently, yet firmly, established order, and Baxter happily acquiesced.

With humans, however, Baxter was very cautious, so we worked diligently with him. By day two, he was accepting gentle paw-stroking and responding with his signature, resonant purr. By day three, we were already considering him a permanent family member.

On day four, the eve of Gayle’s return, Baxter sealed the deal. He dropped onto the floor, front paws crossed, chin resting, eyes looking up beseechingly. “Please let me stay.” We were sold. 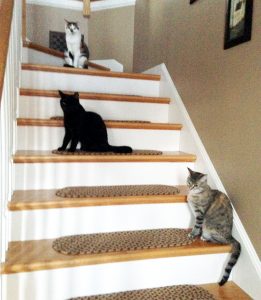 As the most cautious of the three, we continue to engender Baxter’s trust. He now loves to be petted, brushed and engaged in play. And he follows us everywhere – apparent by the gentle thonk-thonk-thonk of feline footfalls as he shadows us about.

Although Baxter remains more aloof than the girls, all three continue to bond. They groom each other, mimic and take turns playing, two-by-two-by-two. There is no animosity amongst them and, as Gayle pointed out, they would never have made it through the 2014-2015 winter had they not been rescued and found homes.

Each is not only different in appearance, but also in personality – Zoe, though smallest in stature, continues to be the adorable “big sister” and leader of the bunch. Piper is the soft, gentle, little lady. And Baxter is the simultaneously aloof, cool dude and the big baby who loves to be loved. Each continues to show love, affection and appreciation for us and for their forever home. And Bob and I continue to be amazed by each of them.

Has it entailed hard work? Absolutely. But with their happiness, and ours, we wouldn’t have it any other way.